Whisky Galore: The story of a close-knit community

Head into the archives to discover the true story which inspired ‘Whisky Galore’ and go behind the scenes of a comedic cinema classic.

A great Scottish tale published in 1946, Compton MacKenzie’s Whisky Galore was inspired by real-life events surrounding the grounding of a cargo ship off the Western Isles.

Three years later, the SS Politician and the Highland Nectar whisky she carried were further immortalised on screen. On the anniversary of the film’s release and as part of Scotland’s Year of Stories, we use our Scran archives to explore a classic of Scottish storytelling 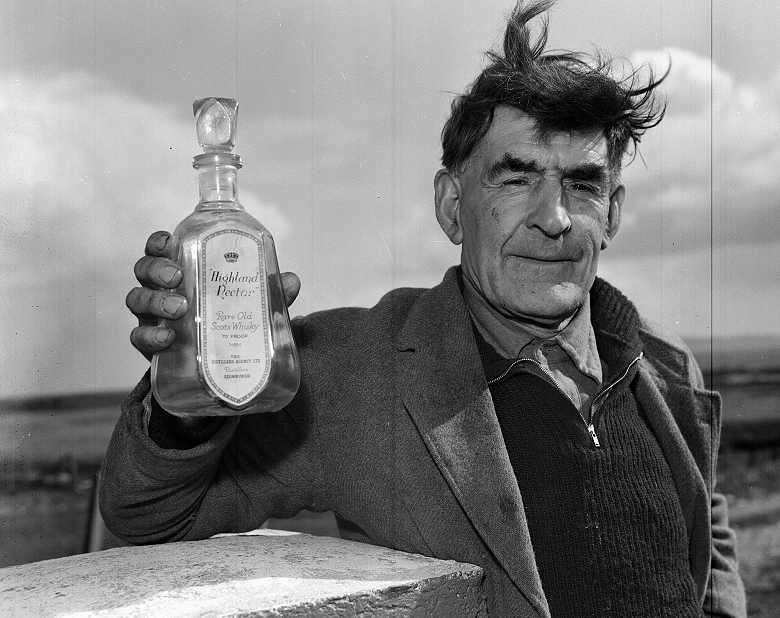 James Morrison from Smerclate in South Uist, with one of the bottles of whisky from the SS Politician which sank off the coast of Eriskay in 1941 (© The Scotsman Publications Ltd, licensed via Scran)

The SS Politician launched in 1921 under her original name SS London Merchant. Sold in 1935, she was renamed and became affectionally referred to as Polly by her crew. Then during the World War Two, she participated in the Atlantic convoys supplying goods between Britain and the USA.

On the morning of 5 February 1941 she set sail from Liverpool bound for New York, carrying many thousands of bottles of Scotch whisky amongst a mixed cargo. Her consignment also included significant amounts of Jamaican currency.

The Politician became stranded on submerged rocks along the eastern coast of Eriskay by Calvay, though there is some dispute over the precise location. 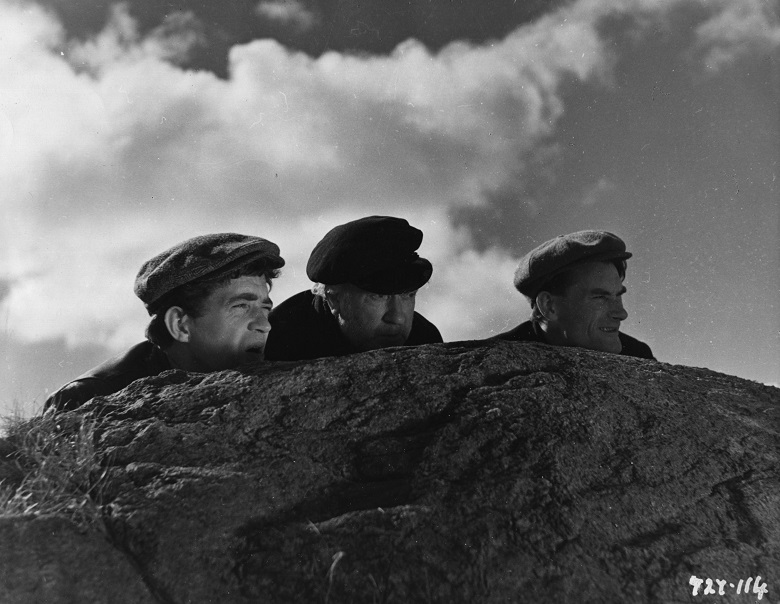 The hull was breached, and S.O.S. messages were sent from the ship. Once the crew were safely on shore, the Hebridean locals set about trying to “recover” the whisky. About 24,000 bottles were salvaged.

In the ensuing days, police and customs officers from the mainland searched the entire island with the result that several islanders were jailed for theft. These events would go on to be immortalised in the book and film, Whisky Galore. 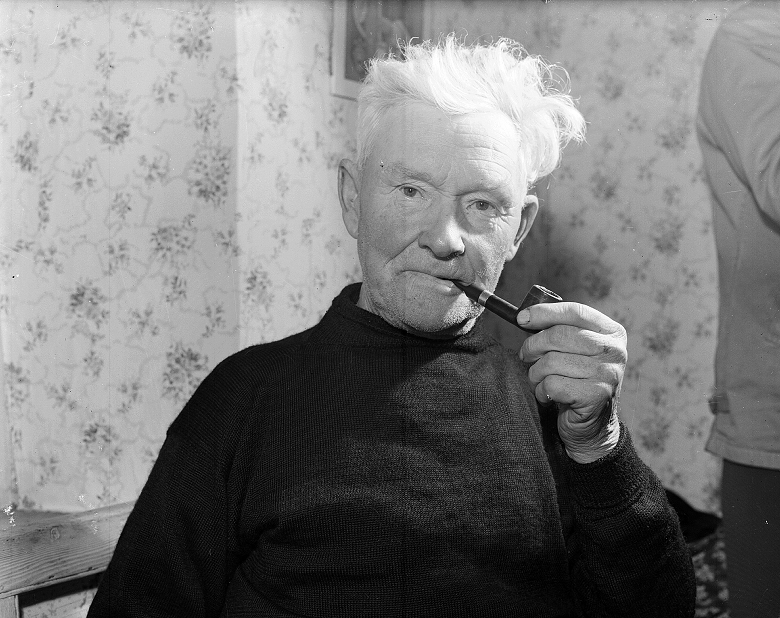 Pictured above is South Uist resident Donald MacNeil (Dòmhnall Ban Eachainn). He was just one of the many islanders who liberated bottles from the SS Politician.

Although born in Hartlepool, England in 1883, Compton MacKenzie found much inspiration in his adopted Scotland. 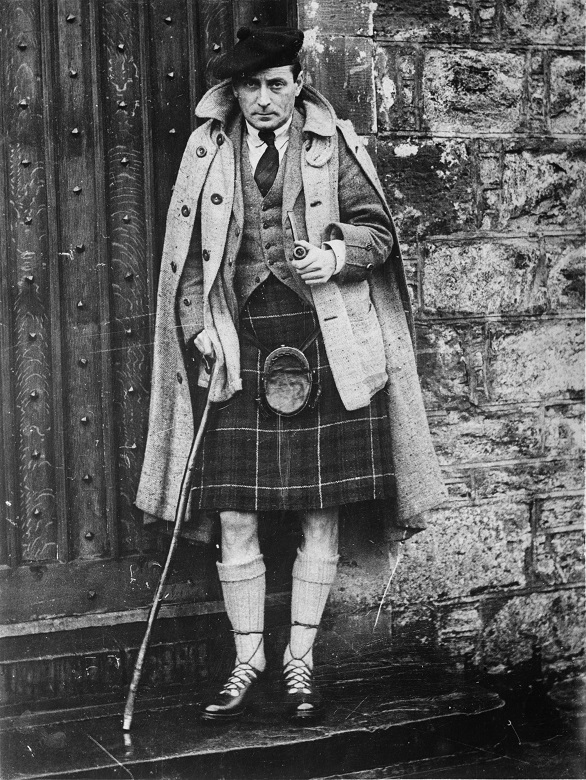 His love of Scotland extended beyond his writing. Best known as an author, he also worked as a soldier, secret service chief, actor, broadcaster and editor. He also made his mark on Scottish politics. He became deeply involved with nationalist politics and was a founding member of the Scottish National Party.

The latter years of Mackenzie’s life were spent living on Drummond Place in Edinburgh’s New Town. But when he died on St Andrew’s Day 1972, he was taken for burial at Eoligarry on Barra. 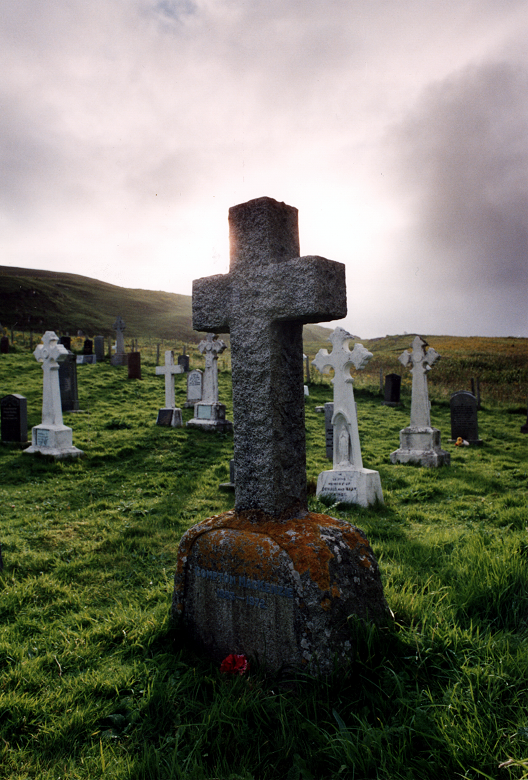 MacKenzie was particularly well placed to expand upon the events of the SS Politician, as from 1934 he had lived at Suidheachan, Northbay on the island of Barra.

He used this as the background to the picture of island life presented not only in Whisky Galore, but also in his second such comic novel, Rockets Galore. 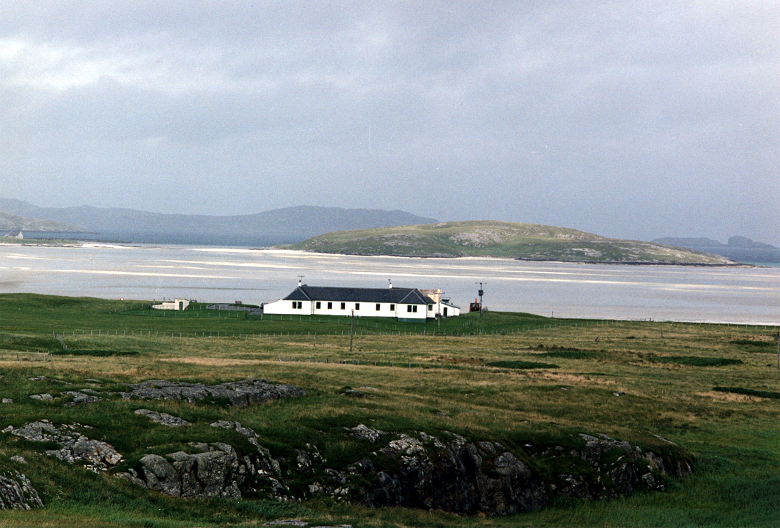 ‘Suidheachan’, the house built by MacKenzie beside the Cockle Strand on Barra (© Newsquest (Herald & Times), licensed via Scran)

The heart-warming film version of Whisky Galore! was released into UK cinemas on 16 June 1949. 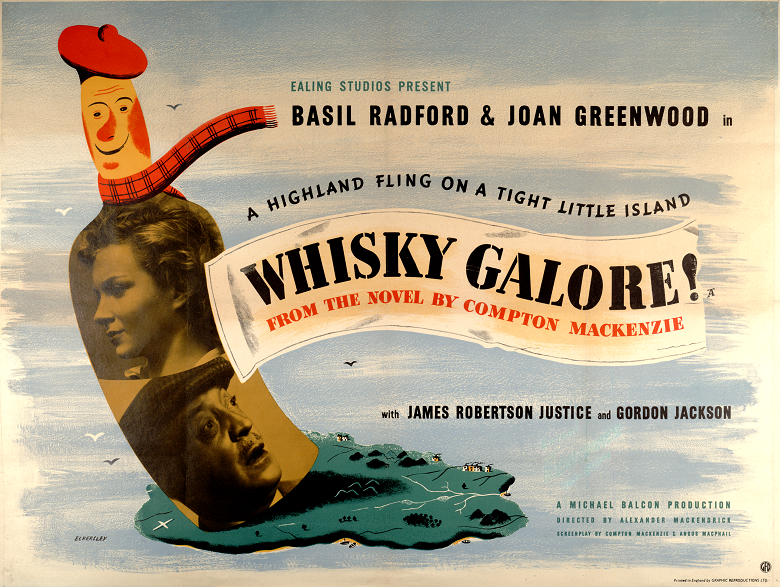 Mackenzie himself appeared in a film, in the role of Captain Buncher, the master of SS Cabinet Minister.

The film version of events concerns the fictitious Hebridean islands of Great and Little Todday, where a cargo of 50,000 bottles of whisky is salvaged from a shipwrecked freighter, the SS Cabinet Minister, by the islanders, whose own supplies have tragically run dry. 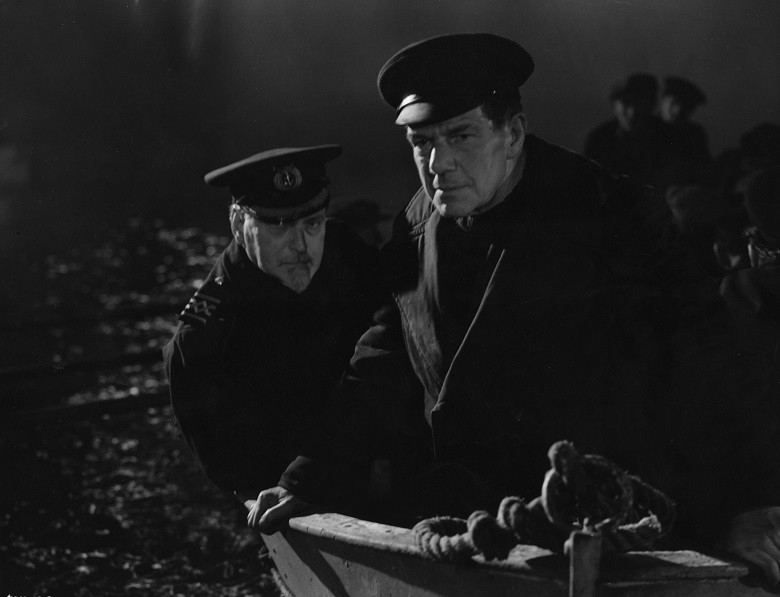 It then follows the escapades of locals trying to hide the whisky from the customs and excise men sent to find it.

The location for filming was the island of Barra, obviously close to Mackenzie’s heart with its stunning coastal line. Many islanders were used as extras. 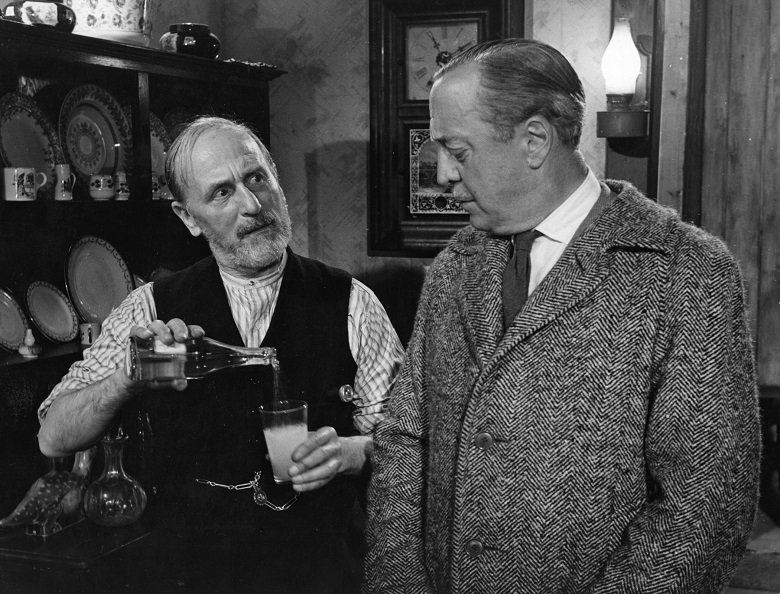 Like other Ealing Studio comedies of the post war era, Whisky Galore! lures the audience into rooting for the underdogs. Throughout the film there’s a great sense of community, as the islanders rally together to outwit the authorities.

The film manages to incorporate local traditions, folk music and Gaelic language into the final cut. In doing so it employs something known as the “Kailyard effect” from Scottish literature. 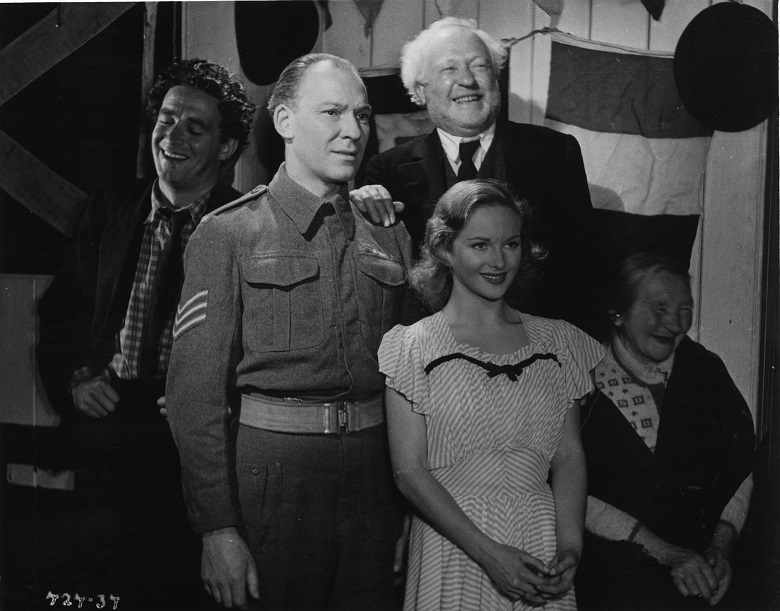 For example, in a scene after bottles have been liberated, the men of the island celebrate the return of whisky. They drink and sing together in puirt à beul, or mouth music. All-in-all it is a joyous event with the illicit whisky being the trigger.

Through such use of nostalgia and certain stereotypes, the film elicits a respect for the islanders and sympathy to their response to the complicated situation which has arisen. Almost making the viewer complicit in their violation of the rules and regulations. 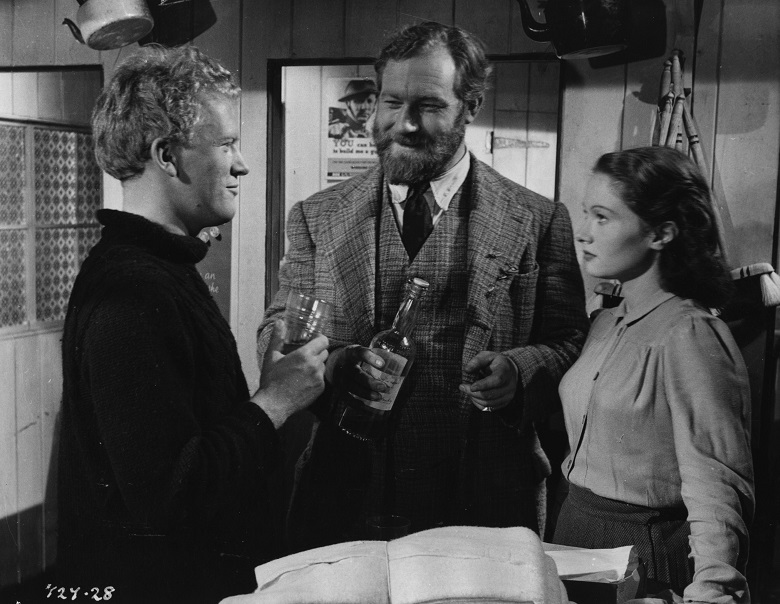 Worldwide fame and a local legacy

When released, the film was embraced by cinema goers and critics alike. In France it is known as Whisky à Gogo, however when released in the USA in December 1949 it had to drop the whisky reference. There were restrictions on the use of the names of alcohol in titles so the film was rebranded Tight Little Island. 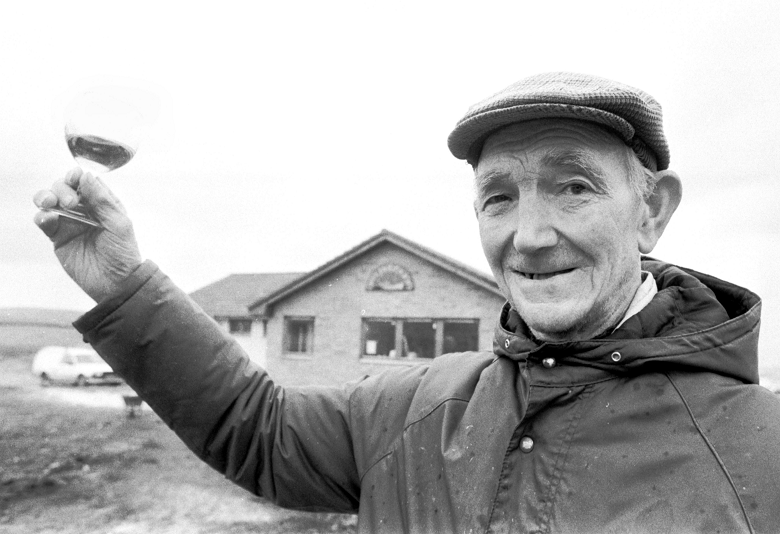 In 1988, the first pub on the island of Eriskay was built, it was named Am Politician in honour of the stricken cargo ship. Today it still houses some of the artefacts retrieved from the ship, worth a visit for a wee dram if you’re in the vicinity. 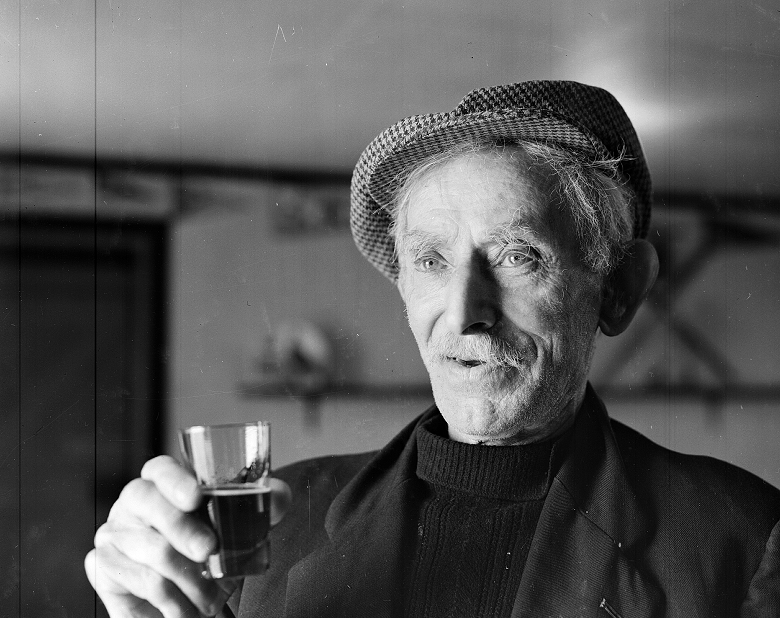 John MacIsaac, nickname ‘An t-Saighdear’ (The Soldier), enjoying a dram of Highland Nectar (© The Scotsman Publications Ltd, licensed via Scran)

There’s more iconic Getty Images stills from Whisky Galore! in the Scran archives, plus much more material relating to the SS Politician, Compton MacKenzie and the stars of the film.

Other trips into the Scran archives on the blog inlclude a celebration of 100 years of Leith and a look at the Queen’s Silver Jubilee visit to Edinburgh.

Jackie Sangster is a Learning Manager with the Learning & Inclusion team at HES – working across Scotland to bring people of all ages and backgrounds the opportunity to discover, understand, and be inspired by our historic environment. Mostly Jackie works with digital archive material from Scran.ac.uk as well as other HES archives, such as Canmore. She endeavours to make engagement with school and community groups as creative as possible, allowing people to explore heritage in a meaningful and enjoyable way. View all posts by Jackie Sangster